Holopaw, Florida is technically not a town, a village, or even a hamlet. The small area in the middle of the state is officially zoned as an “unincorporated community,” which means that it’s administered under the jurisdiction of Osceola County rather than its own municipality. In other words, the less than 5,000 people who live in Holopaw don’t have a local government to call their own, residing in the liminal space between established community and remote hinterland.

John Ross grew up near Holopaw, and he chose to borrow its namesake for his second record under the moniker Eerie Gaits. Much like how the area itself is independent from traditional governance, Holopaw t he album is similarly untied from genre and unmoored from singular temperament. The nine instrumental compositions ripple between upbeat guitar strums, bristly fingerpicking, and pensive sections of dense, misty synths. Songs like “What’s Eating You” and “The Rainbow Trout And The Wicker Creel” are the sort of full-bodied yet placid indie-rock he writes with his Brooklyn band Wild Pink (who’ve received glowing coverage at Pitchfork, NPR, Stereogum, etc.).The former features a bobbing bassline, glistening, reverb-laden guitar leads, and warm pockets of synths that grace the other instruments like sunlight streaming through a window on a cold winter afternoon.

However, the song that follows, “Out In The Tall Grass,” is three minutes of patiently stretching ambient music that recalls both the classic work of Brian Eno and the naturalistic muralism of a contemporary composer like Emily A. Sprague. Between the field recordings of crickets chirping and children playing, the woodland song titles, and the album’s scenic cover art, it’s obvious that Ross is attempting to create a sense of bucolic place with Holopaw. But unlike the wholly meditative, almost utopian pleasantness that Sprague and other ambient artists shape with their music, Ross’ compositions will sometimes shift dramatically into foreboding gloominess.

One of the last and most complex songs on the record, “A Quiet Explosion In Your Secret War,” ends with ten seconds of peaceful rainfall that would make for a comforting finale to the record. Instead, Ross has it bleed into a sub-two-minute cut called “Oia” that floats upward majestically before taking a sonic and emotional dive into drab droneyness. The track serves as an intro to the album’s actual conclusion, “99, 100”, a seemingly innocuous title that takes on a darker meaning as the song’s haunting synths balloon in volume and scope like the soundtrack to a Lynchian suspense scene.

In a stark contrast to i ts hopeful beginning, the album ends with a grim fade into nothingness. Compared to the first Eerie Gaits record, 2017’s Bridge Music (which was inspired by the act of driving over bridges), Ross thinks that Holopaw i s “darker and more joyful at the same time.” Like Holopaw, a town that was mostly abandoned after its mill closed in the 1940’s but remains a lush and picturesque segment of sunny Florida, this album captures the duality of rural America; a shifting, defiant undulation between bleakness and beauty. (Bio by Eli Enis) 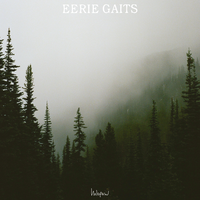